Hi everyone. Today I’m joining in with Word of the Week. It’s been nearly a year since I last joined this linky, but today I’m inspired to. The idea is to sum up your week in a word or phrase. My phrase for this week is: getting active.

You see, last week I was still pretty badly under the weather. This week, though I’m not fully recovered, I’m getting back on track. Though I did walk most days last week, I didn’t get in any other exercise.

This week, so far, I reached my step goal of 10K steps a day each day. I am pretty motivated. Last week, my husband joked that I’d earn a Domino’s pizza for every five million steps I took. That’d take me about a year and a half if I reached my step goal each and every day. I don’t, of course, but I do meet the goal about three times a week on average. This week, five times, so far. I still marvel at the fact that, about three years ago, I merely dreamt about reaching my step goal a few days a week and considered it a sign of optimal physical health. This does show that, as much as I may think I’m deteriorating, at least with respect to physical activity, I’m not.

In addition to walking, I went on the elliptical both yesterday and today. I got in only about ten minutes each day, but that’s okay, considering I’m still not fully recovered from my cold. Yesterday, I listened to a Christian workout playlist. Today, I chose the Southern rock playlist I created some years back when I still went on the elliptical regularly. It was good to listen to my favorite song on that playlist, Jessico by the Kentucky Headhunters.

I also did some core training, ie. planking. I can do it for about ten seconds at a time, which isn’t much, but oh well. I know that if I continue to try, I’ll get better eventually.

Being able to be this physically active, truly boosts my confidence. I mean, I had to buy new clothes this past week and the jeans I ordered, seemed a bit tight at first. This caused me to feel rather self-conscious about being overweight. My staff though reassured me that jeans always fit tighter when you first buy them. Besides, though I’m overweight, at least I still have the exact same size I had about six years ago when I ordered my current favorite jeans, for which the new ones are a replacement. This means I’m not gaining weight.

Okay, I’m supposed to be in bed already, but I can’t sleep. What better thing there is to do than write a blog post, right? I’m joining in with Anne’s Word of the Week for the first time in forever. The idea is to sum up your week in a word or phrase.

This week wasn’t the best mental health-wise. Yesterday, I landed in a full-on crisis. I didn’t express my dark thoughts right then, but I did to my staff this evening. It isn’t the first time I’ve experienced acute suicidality, but the intrusive thoughts and images I get then shock me everytime. Thankfully, I was able to calm down after taking a PRN lorazepam. I will be calling my nurse practitioner at mental health tomorrow, since my community psychiatric nurse is on vacation. I know I’m not clinically depressed (yet), but I do want my treatment team to know about my crisis.

The rest of the week I pretty much saw it coming. On Monday and Tuesday, I was still pretty much in my normal mood. Not euphoric, but not depressed either. In fact, I signed up for the Bout of Books readathon on Tuesday fully intending to spend the better part of the week reading or talking about books. I didn’t. The first day, I got through 23% of Five Feet Apart by Rachael Lippincott. I abandoned the book for the rest of the week though.

Particularly Friday, Saturday and today were hard. I did try to remain active. Like I mentioned several times already this past week, I tried to dance. Today I actually sort of succeeded. I also managed slightly more steps and active minutes as recorded by my Fitbit this week than the week before.

I have been trying to be more mindful of myself this week too. By this I mean I’ve started up meditating again. I use Insight Timer, which has like thousands of free meditations. If meditating becomes a regular habit, and I sure hope it does, I may pay for the premium plan. Honestly, though I was still close to crisis today, the affirmation in one of the meditations I’ve been listening to, helped me.

I also started exploring some ways of getting my eating and ultimately my weight under control. This is where dancing comes in handy again.

To sum it all up, I’m choosing “Dancing Through Darkness” as my phrase for the week. I feel depressed, but I’m also trying to actively do something about it.

How was your week?

This was truly a mixed week. I wanted to write a gratitude list for it, and maybe I will do so tonight, but right now I don’t feel like it.

On Tuesday, the man wasn’t at day activities. I heard the staff talk about his group home staff having had a scare in the morning, but he was still alive. In the afternoon, I heard them talking about palliative care. By late afternoon, when us clients werre ready to leave, I heard that he’d passed. For those who don’t know, my day activities group is for people with severe intellectual disabilities, so i’m the only one who understands the conversations staff have among themselves basically.

On Wednesday, the other clients were told that this man had died. Most still don’t fully understand, but some have made beautiful drawings in his memory that will be given to his family on Monday. Near the center’s front door is a table with (electric) candles, a picture of the man and all the drawings. I decided to make a butterfly soap for it. I made it on Wednesday afternoon with my support coordinator. It turned out great, a beautiful lavender blue with lavender fragrance oil.

On Thursday, I was off from day activities and I spent the morning in bed. It didn’t really feel good, but I had nothing planned for the day except for horseback riding at 4:30PM. That was a great experience. I rode Aagje, a fjord horse with long hair (which is unusual for this breed).

Today, I showed my day activities staff the butterfly soap I’d made and placed it on the client’s remembrance table. We tried to do day activities as usual as much as possible. We walked to the marketplace in the morning. In the afternoon, when I went for a short walk with the day activities coordinator, I told her I wanted to ask a rude question. I wanted to ask whether, now that this other client had died, I could take his place at day activities on Thursdays. I still feel pretty awkward having asked this, but she understood that, if I waited a while, they might’ve gotten a new application. I E-mailed my support coordinator on this issue too.

Early this week, I got an E-mail from my support coordinator forwarding the termination letter from the Center for Consultation and Expertise. I didn’t understand this, as the consultant had offered to be my contact for the long-term care funding agency. Apparently, she still is somehow. I really hope I hear from that agency soon. My support coordinator did E-mail the local authority’s social consultant, who is in charge of my community care funding, to extend my funding for two months as we wait for long-term care to kick in.

Right now I feel… numb? I was a bit dissociated this afternoon, as my day activities staff were discusing clients’ severe challenging behaviors (not current fellow clients of mine). I remembered my time on the locked psychiatric unit, where I was often threatened with seclusion for problem behaviors and was in fact secluded or restrained a few times. It felt good disclosing this to my staff, but I did feel a bit awkward.

Now I’m waiting for my husband to get home from work. He’s going to bring French fries and snacks. I look forward to that.

I am linking up with Word of the Week. I choose “loss” as my word of the week in my fellow client’s memory. 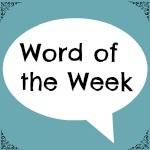 I am participating in Word of the Week (or #WotW) for the first time on this blog. My word for this week isn’t a shiny, happy one. It’s “struggle”.

This week was an eventful one, yet nothing really did happen. If that sounds like a contradiction, it’s because it is.

Early in the week, it became obvious to me that my depression wasn’t lifting like I’d hoped it would. I mean, I’d hoped that, once my support coordinator was back from vacation and I’d have home support three times a week again, I would feel better. I didn’t. I felt worse.

Thankfully, my support coordinator offered to come by on Tuesday for an extra hour of home support. I am so happy she did, for I didn’t know how else to make it through the day.

On Wednesday, my support worker came by in the afternoon. We ran some errands and I thought I’d do better that day. Not so. In the evenng, when it became apparent my husband wouldn’t be home till past 7PM, I had a meltdown.

On Thursday, I slept in till past noon and again lay in bed for a bit at 2PM. I could’ve been in bed all day, but my support coordinator would be here by 3PM. Thankfully, she was able to motivate me to go for a walk. That was when I decided to start the process of hopefully getting into supported housing. I don’t have my hopes up, of course.

I know that if the powers that be see this post and conclude from here that I’m just struggling with depression, they’ll not provide funding. After all, treatment precludes support. Besides, mental illness only qualifies you for temporary support. So I’m hoping the powers that be will see my needs beyond depression. I’m also blind and have a brain injury and autism, after all.

Interestingly, I had no problem convincing my psychiatric nurse practitioner that I do need 24-hour support. He was one of the first to ditch the dependent personality disorder label I’d been given by my last institution psychologist. As he said when I called him on Friday, I may be a little dependent, but that’s normal because, duh, I’m blind. I’m not sure that’s entirely true, in that to my knowledge most people who are “just blind” don’t need as much support as I do. However, I’m not “just blind”.