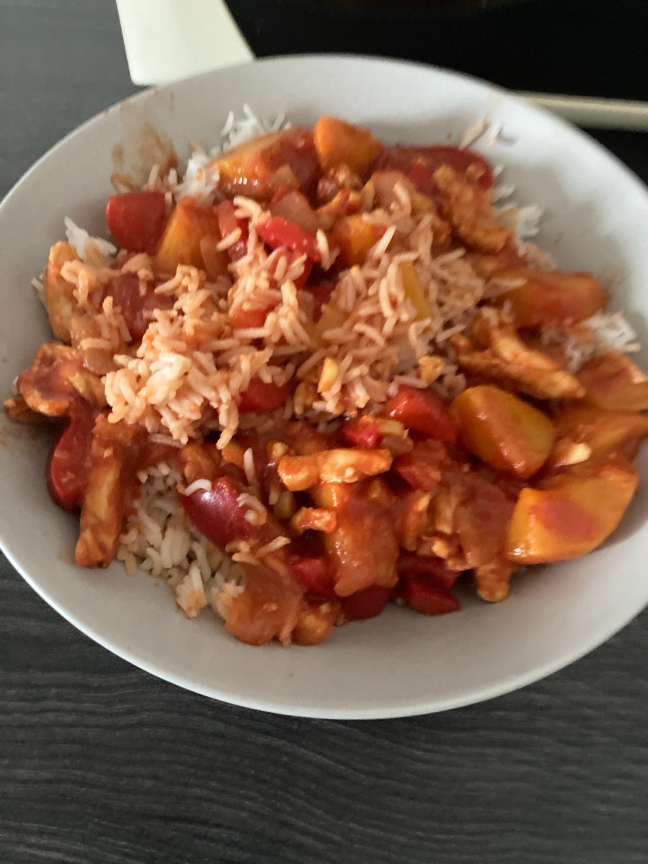 Hi everyone. I’ve been neglecting my blog a bit as other creative passions take over. I really need to remedy that. Today, I’m once again late writing a post, as it’s nearly 9PM. At least I’m writing something. I’m joining in with #WeekendCoffeeShare. As you can imagine, it’s rather late for coffee for my liking, but I bet we still got soft drinks in the fridge. I allowed myself a Dubbelfrisss this evening. I normally skip them, as they’re not 100% sugar-free and I’d rather have an extra piece of candy than this. Today though, I gave myself permission for both some licorice and the Dubbelfrisss. Anyway, Dubbelfrisss is only slightly carbonated, but we might have coke too or even alcohol-free beer (alcohol isn’t allowed here). Let’s have a drink and let’s catch up.

If we were having coffee, I’d share that I had a good appt with my psychiatric nurse practitioner on Monday. Last week Friday, I had had a panic attack. It was related to the war in Ukraine and fear of what might happen, which I realized at my appt is different from a flashback to a traumatic experience I really did go through in the past. Not that it really mattered in that moment, as the feeling was just as overwhelming.

I also linked the panic attack to the staff who had triggered me and, since this staff is new, I felt really anxious about the whole situation of allowing him to work with me one-on-one. Thankfully, once it got to this point, we were able to talk through the issue and let it go that way. And indeed, this staff’s first time working one-on-one with me went pretty well if you ask me.

If we were having coffee, I’d tell you that, on Wednesday, I cooked the best chicken pilav! I did most of the cutting of the vegetables myself (the chicken was pre-cut) and also most of the cooking. We had my favorite rice with the pilav too! 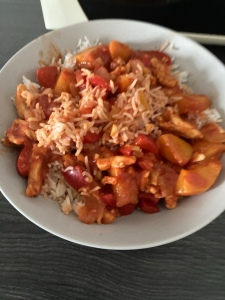 If we were having coffee, I’d also tell you that I’ve been taking more flower photos. I finally started actually snapping the pictures myself most of the time rather than letting my staff do most of the actual photographing. Of course, my staff still have to tell me where to point the camera. It’s cool that I can make use of my knowledge of photography, gathered from photography blogs of course, to help the staff figure out ways to help me take better pictures.

I’ve also been running a few of my photos through a plant identification app called PictureThis. The one below is a Chaenomeles Japonica. 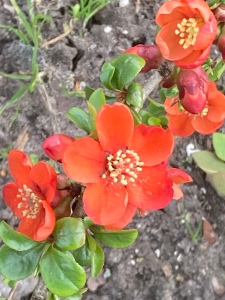 If we were having coffee, lastly I’d tell you that yesterday, I decided semi-impulsively to go to Action to try to find macrame cords. Obviously, experienced macrame artists would say I should get high-quality cords, but I’m just trying to get a hang on the knots. The lark’s head knot, square knot and spiral knot are relatively doable after some practice, but I keep getting stuck on the half hitch knot (and don’t even get me started on its variations). I mean, when I saw a beginner tutorial with pictures, it sounded a lot easier than I thought it should be. That tutorial was doing the half hitch knot with just two cords, which all other tutorials show isn’t possible. I’m pretty sure I spent some significant time tying just plain ordinary “old bitch knots”, as my husband would likely call them.

With respect to my shopping spree at Action, I also ended up buying a lot of felt stickers that I now don’t know what to use them for, a new organizing box that I may not even be able to use yet, deodorant, butterscotch candies and probably more. I spent less than €10, but that’s also because my staff paid for the macrame cord and the felt stickers from day center budget.

How have you been?

In my bubble
I sit
Staring out
At the world
Outside

I have had the concept of being “locked up inside” in my head for a few days now. I first came across the phrase in an E-mail support group for parents of children with selective mutism, a disorder in which a child is unable to speak in certain situations due to intense social anxiety. I have never had this diagnosis, but as a teen and young adult, did experience periods of mutism due to anxiety and dissociative freeze responses. I use the term “locked up inside” for a feeling of intense anxiety which causes a freeze response that leads to an inability to speak and sometimes move. The feeling of being “locked up inside” is particularly frequent and intense lately.

I am linking this poem to dVerse’s Open Link Night.

Today is Thursday and I’m participating in the Thankful Thursday blog hop. I am thankful for all the wonderful people in my life, who stick by me even when I’m struggling.

We have been struggling a lot lately. On Tuesday, we were in an almost-constant state of panic. Our staff tried to comfort us, but it was hard. They were nice though and even though we were very distressed, they didn’t get reactive.

Then Wednesday didn’t start good either. We had to have a blood draw and the laboratory person was supposed to come to our home. She hadn’t told us at what time she’d come though, so I waited for an hour, not having eaten as instructed, and then left. I was in a meltdown already.

Later that morning, once at day activities, I was on the rocking lounger in the yard. The staff had said she’d come get me back indoors “in a while”. Well she looked through the window and saw me rocking nicely, but then when I wanted to get off, no-one saw or heard me. That’s when I melted down again.

And then, in the afternoon, my husband informed me that he wouldn’t be home from work till 8PM. My in-laws couldn’t have me eat at theirs either, so I would have to be alone at home till 8PM. I was in a huge meltdown again and ran out of the house.

Thankfully, a woman who lives further down the street came to me and calmed me and helped me find the way to my home.

In addition to being grateful for all the nice people in my life, I”m thankful for PRN tranquilizers. My husband has them in a locker, because I’ve taken two overdoses on them in the past. I hardly ever use them, so when I had used my last pill, I’d forgotten to ask my husband for a refill. Fortunately, he did yesterday. He reminds me that even though I hardly use them, I don’t have them prescribed for no reason at all.

Hi, I’m Carol. I struggle a lot with our autism. I’m a little panicky at the moment. First of all, I woke up with terrible pain in my left shoulder. It’s been bothering me alll day. We finally took an ibuprofen when we got home from day activities at 5PM. It’s better now, but still bad.

This morning, I overheard the staff at day activities talking about a possible new client joining our group. I immediately worried that this’d mean I’d be kicked out. Not because they need the place (or maybe because of that too), but maybe if my challenging behavior worsens as a response to the staff being busier. That’s what happened at my previous day activities. Then again, they had three new clients join the group in a matter of weeks.

Moreover, we had a Christmas meal at day activities today. This meant my day was different from the usual Tuesday. One of the staff at my group had to help clean up after the meal, so she was in the kitchen most of the afternoon.

Then the staff started talking about day activities next week. They’re closed on Monday but open on thursday and Friday. Then, only six of us will be at the center, which really isn’t enough to justify staff being there. They said that the center normally closes if fewer than ten clients will be there. We want so badly to attend day activities and I somehow understood they’re considering closing the center next week. The staff reassured me, saying they had to set this rule for next year but for now the center will be open.

Still, when I got home, the whole thing overwhelmed me. I started seeing images in my mind of myself with worsening challenging behavior. I felt unsafe at home alone and rejected too. Like, they kicked us out of the independence training home in 2007 and out of the institution last year because of our behavior. Rather than giving us more care when we needed it, they gave us less. Same with the old day activities place. I really hope we can somehow find us suitable supported housing, but I’m so scared that no place wants me. I finally called the on-call nurse at the psych hospital and had a chat with her. That was good, but I feel guilty about having called, because my team say I really shouldn’t need the prescription phone call anymore.