I was feeling a little down on Sunday, so I checked out the gratitude section of the book Journaling With Lisa Shea. This is really a collection of ten 32-day guided journals and an introduction to journaling. I bought the entire thing for a deal price on Amazon several years ago.

I already covered some topics from this section before, but one I didn’t write about is my favorite food. The prompt asks me to recall what favorite food makes me brim with joy and sigh with delight. It goes on to ask whether I can remember eating it for the first time.

Well, my all-time favorite food has to be Domino’s pizza! I am not 100% sure whether this was the first time I ever had it, but I think it was. It was sometime in late 2010 or early 2011. My husband, then still my fiancé, lived in student accommodation in Kampen, where he studied theology. His studio was real close to the train station, the river IJssel, and several snack corners and fast food restaurants. Including Domino’s.

I can’t remember which pizza I took that first time. It might’ve been during my six months or so of trying to pass as a vegetarian to my fiancé, who was a vegetarian at the time. I might also have taken one of their chicken pizzas. I think I did that. I probably also chose red peppers as an extra topping, as I was and still am a lover of very spicy food.

Nowadays, I almost always choose a chicken kebab pizza, but I think they didn’t have that one back then. I also always look at the new and noteworthy category, because sometimes they have truly delicious pizzas. I particularly remember one called something like Chicken Zanzibar, which had a piri-piri swirl on it. I topped it off with extra red peppers. Since I took a large pizza and didn’t have the monstrous appetite I’d expected, I left my husband a slice. He pretty soon texted me with a list of swear words about how spicy the pizza had been. Even thinking back to that makes me laugh. 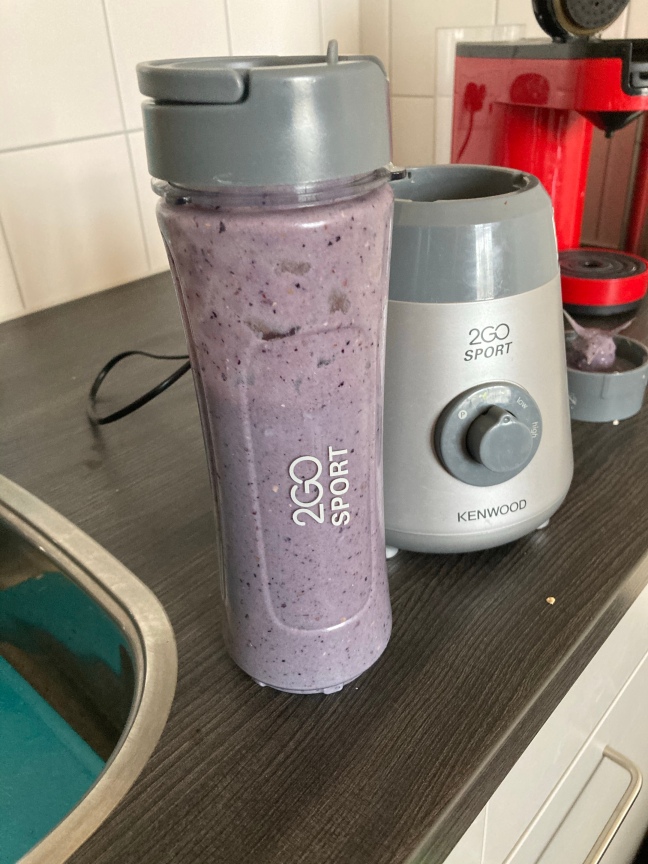 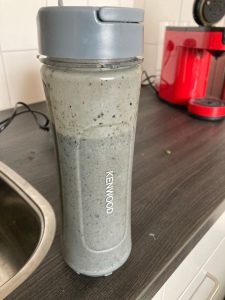 Hi readers, how are you? I’ve truly been very active lately. Today I initially didn’t feel that motivated to do much of anything, but I eventually managed to read a good amount. I also walked for 30 minutes, albeit divided between a 10-minute walk together with another client and a 20-minute walk with just the staff. And now I’m looking through my drafts folder to start a blog post for today.

Last week, lots of ideas were floating through my mind. I couldn’t actually follow through on most completely independently, so I discussed some with my day activities staff. I wanted to do a cooking activity again. For some reason, I got thinking about trying out oatmeal recipes. So I went about and googled some simple oatmeal recipes. I cannot seem to find the one I used right now.


I had the staff mash the bananas with a fork. Then we threw all ingredients in a saucepan and brought it to a boil. Then turned the heat down and had it cook for a few minutes. I stirred constantly, so that the oats wouldn’t get crusty. After we removed the oatmeal from the stove, we added granola as a topping. That wasn’t in the recipe I used, but I thought I’d like it and we had lots of granola left over anyway.

My sister used to eat oatmeal for breakfast when she was little. I never quite liked it, but this was truly delicious! It was also very filling. I ate it for lunch and didn’t need anything else to feel full.

The staff gave some of the oatmeal without the topping to some clients who normally eat mashed bread porridge and they loved it too.

Next time, I’m going to try to make some overnight oats. I’m not going to let it sit in the fridge for an entire night, but most recipes I checked said two hours is generally enough.

Hi all, how are you? I had a better day yesterday than Monday. Didn’t sleep much at all Monday night, because I was so excitedly browsing sites for soap making recipes. However, I wasn’t really tired or grumpy at all.

Today was even better. On Wednesdays, the staff interns at day activities usually do a cooking activity with me, as most other clients are off to a weekly music performance in the assembly hall. I hate the music performance but love cooking, so that’s a win-win. One of the interns changed her schedule, so isn’t on on Wednesday anymore, but the other still is. Today, we made a smoothie bowl. It didn’t turn out as well as I wanted. Particularly, we used a little too much milk.

This made for one large bowl.

How We Made It

First,, I peeled the banana and cut it into slices. I had the intern do the half banana that would be used on top, as I doubted my slices would be thin enough. Then, I scooped the banana, peanut butter, cocoa powder and milk into a measuring cup. I then mixed it using an immersion blender. I have a regular blender at the care home, but had forgotten to take it to the day center. The intern poured the mixture into a bowl and we added the granola and sliced half banana on top. You can also add coconut chips.

How Did It Taste?

It was delicious! Like I said, it was a little too thin. I had expected the thickness to be like custard, but it was more like a milkshake. The chocolate and peanut butter tastes were really well mixed. The smoothie almost tasted like chocolate-coated peanuts. There were hazelnuts in the granola, which tasted extra good when combined with the smoothie. Overall, I loved the activity and the result.

Linking up with the Wednesday link party.